I opted to learn C#. I have never worked with it or had even seen it before.  I did Computer Science in school some 13 years ago (no prizes for guessing my age!) and worked with Turbo Pascal for 3 years. I learned binary code and actually wrote code, like with a pen and on paper lol. But I also created a working app for a company in my matric year so I am not that ancient!

But I must say, it is like riding a bike. In terms of not being confused dizzy that is. The concepts and logic remain the same. If you want a career in this field however, as a dev, I believe that what will put you ahead of the pack is the rate at which you are able to adapt to a new language. Change is constant. And for that, I love that immedia has a learning culture!

My mentor’s name is Nqobani, pronounced with a click, every time. He is a developer and is currently working on a really cool bot in-between showing me the ropes. 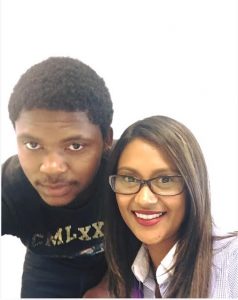 So far I have written a few working programs, to greet the world, collect and sort data, loop commands. But I have yet to hack into the CIA!