Overall challenges and there solutions Day 5 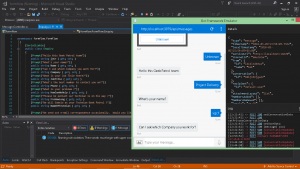 Challenges: My visual studio was not workIng with Bot emulator  I was getting an error Missing project subtype and it was specifying the path, which I did not understand.

Solution: I downloaded 2017 visual studio because I was using 2012 version and I modify VS 2017 and I worked well ever since.

Challenge: Structuring conversation It was hard I was just doing it because I was underestimating it  and not applying any logic on it every time I run my program the output  would get mixed up and that was terrifying.

Solution: I googled the strategies and technique’s on how to structure a conversation and I came across to strategies called form flow and I applied it everything went well

When I was working with bots, I wanted pull pictures, add and see popup of pictures I did not know how to do that. Thanks to my Mentor (Mbuso and Priyen) they help me

What I learned during summer school